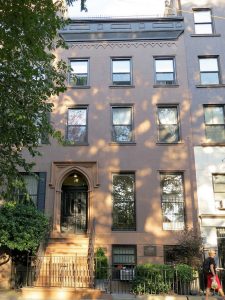 Built in l849, this Gothic Revival-style rowhouse was home to the alto saxophonist Charlie Parker (Bird) from l950-l954. With Chan Richardson and their three children, Parker occupied the ground floor apartment at the height of his career, having achieved considerable success and renown as the co-founder of bebop, the modern jazz style that he and trumpeter Dizzy Gillespie created in New York City during the mid-l940s. Parker enjoyed international fame while living here, performing with large and small ensembles, as well as with Latin big bands and string sections. Avenue B (between 7th & l0th Streets-along Tompkins Square Park) was renamed Charlie Parker Place in l992 and since l993 the Charlie Parker Jazz Festival is held annually in the park to celebrate Bird’s birthday (August 29, l920 in Kansas City, Kansas) and his contribution to 20th century music.

The Charlie Parker Residence was placed on the National Register of Historic Places in l994 by the U.S. Department of the Interior. In l999 the New York City Landmarks Preservation Commission designated the Charlie Parker Residence a New York City Landmark, finding the house at l5l Avenue B has special character, historical and aesthetic interest and value as part of the development, and heritage and cultural characteristics of New York City, New York State, and the nation.